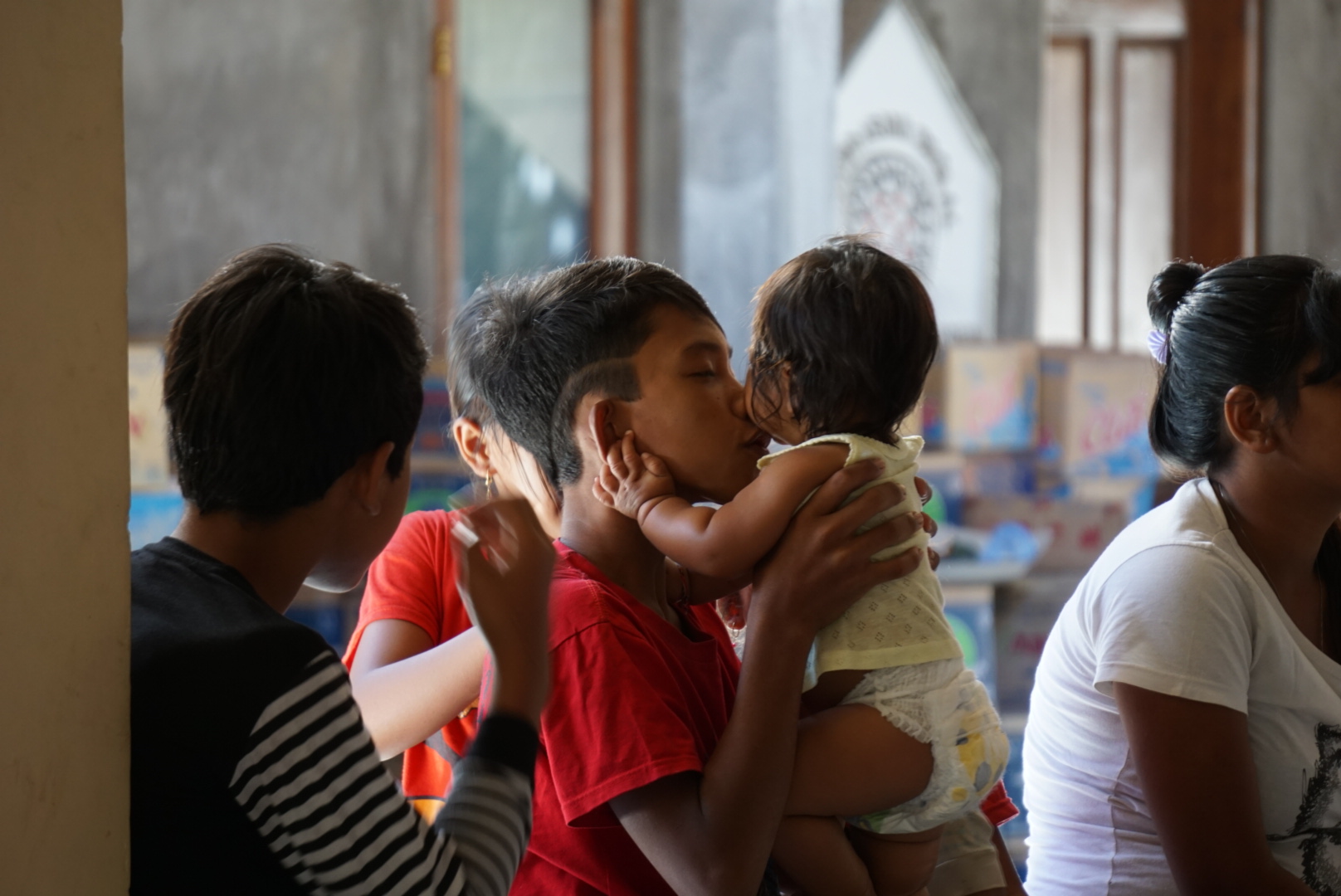 After lying dormant for 63 years, Mount Agung, a stratovolcano located in East Bali, started showing activity in early September 2017, going from Stage 1“Normal” to Stage 3 “Watch” and Stage 4 “Warning” in under 2 weeks. Following a swarm of volcanic earthquakes and increased gas and steam emissions, the volcano entered an eruptive cycle and activity peaked toward the end of November, when a volcanic plume over 4000 mtrs high was ejected. Volcanic ash streamed into the atmosphere and mud lahars flowed down the southern and northern flanks of the volcano, damaging houses, land and agricultural areas, fortunately with no fatalities.

Thousands of people fled Mount Agung, some on foot, leaving behind their homes and whatever is non-essential. ID documents, a favorite toy, blankets, a handful of clothes, 2-3 schoolbooks, a cooking pot, prayer items, a harvesting knife, a carving tool… the decision on what to bring and what to leave behind is not easy.

In the long months between September and February, over 140,000 persons left their homes. They stayed in makeshift camps, community centres, football fields, waste sorting barns – whatever space was available. In these heart-breaking circumstances, the host communities threw open their doors and welcomed the evacuees into their public spaces and private homes. Gamelan troupes vacated community halls and moved their equipment to make room for evacuees. Sports clubs gave up practice, to allow thousands to camp on their grounds. Mothers’ groups donated pocket money and school uniforms for displaced children. The generosity and solidarity of the Balinese community was astonishing and humbling.

Between September and February, Gaia Oasis worked with village elders and the Social Department, to provide regular food supplies to the East Buleleng Logistics Post servicing over 21.000 refugees. We also worked with the Health Department to provide a water purification system for drinking water for over 500 refugees, and with the Education Department to provide emergency stationary packs to 1053 displaced schoolchildren. Together with the Red Cross and our wonderful volunteers, we built Emergency Toilets in nearly 500 refugees, distributed safety equipment and baby hygiene kits, entertained and gave massages to children and old folks in camps, and provided funds for increased waste services to deal with the influx of refugees.

As the waiting became longer, however, the pressure became higher. Families were split up, with the men going to look for seasonal farm jobs or work in towns, and women, children and grandparents staying at evacuation centres. Host communities started wondering when they could resume normal activities, as the ritual demands of the New Year in March started to loom. Donors to the Buleleng Logistics Post dropped from 50 persons a day, to 2-3 persons. Bali’s governor was purportedly quoted as saying that he was fighting alongside the tourism industry to lower the alert level and hence calm tourist fears, and to reduce the financial strain caused by having to provide rice for the refugees. A lower alert level means a reduced hazard zone, and correspondingly fewer persons who qualify for refugee status and government support in the shape of free rice, shelter and medical services.

On 10 February 2018, the alert on Mt Agung was lowered from a Level 4 “Warning” to a Level 3 “Watch” and the hazard zone further reduced to 4kms from the crater. Refugees slowly started to return and resettle into their home villages. As at the end of March, approx 110 families remain living in shelters, as their villages are either cut off by lahars, their crops have failed, and/or they cannot return as their homes fall into the 4km “sterile” zone. Working together with the Indonesian Red Cross (PMI), Gaia-Oasis continues to assist these displaced families, as we have done so consistently for the Mt Agung refugees over the past 6 months.

Volcanic eruptions can continue for several months and Mt Agung is still at a Level 3 “Watch”, meaning the potential for eruption remains albeit with a lower explositivity index. It may be many months before the situation returns fully to normal, and hence Gaia remains on standby, assisting where we can, as volcanic activity is very dynamic and may change at any time.

For detailed information on what is happening on the ground, what has been done and what is needed, please see our Reports. You can check our monthly updates and our latest quarterly financial report for Jan-March 2018. Do also see their pictures.

Finally, we would like to thank the many generous donors whose incredible generosity allowed us to meet and exceed our fundraising target within 3 months. You can see our fundraising target summary here. We will provide full project accounting and reporting at project close, and any funds not disbursed will be referred to the donors.

Unknown to us, a passing visitor nominated our work and National Geographic Traveller UK  has just named us  their ’2017 Hometown Hero award for best social impact schemes.

Thank you for your kindness and blessings; we pray for island of Bali and all her people. May All Beings Be Happy!