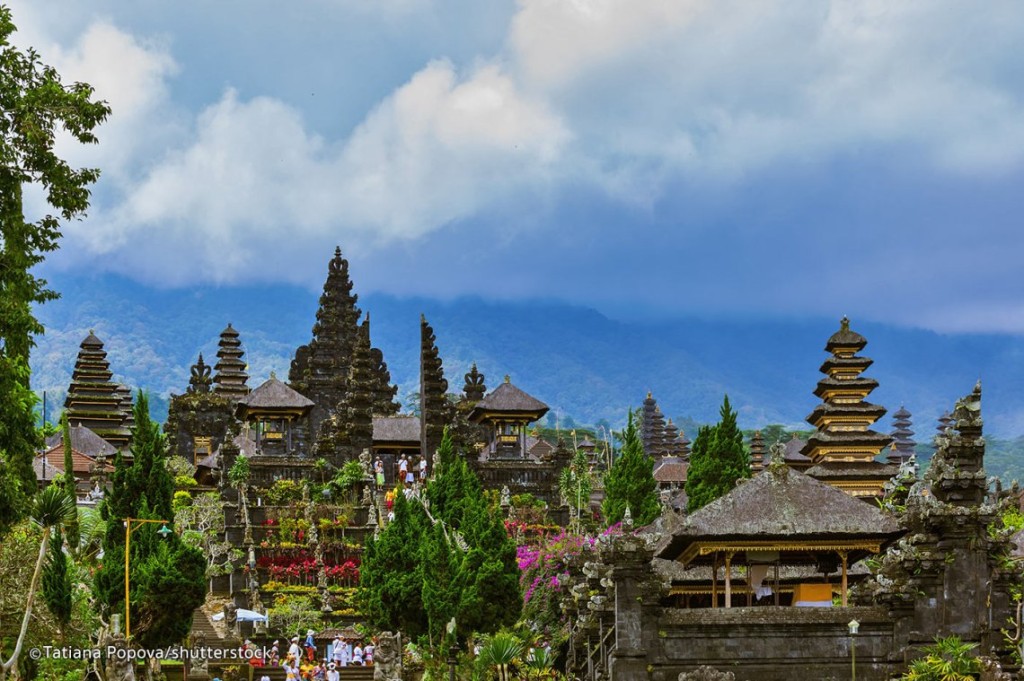 Besakih Temple, known as Bali’s ‘Mother Temple’ for over 1,000 years, sits 1,000 metres high on the southwestern slopes of Mount Agung. Besakih is an artistic and unique complex that comprises at least 86 temples which include the main Pura Penataran Agung (the Great Temple of State) and 18 others. Besakih is the biggest and holiest of the island’s temples and is surrounded by breathtaking and scenic rice paddies, hills, mountains, streams, and more.

To the Balinese, visiting the temple sanctuaries is a special pilgrimage. Mount Agung’s high location gives it an almost mystical quality. Many stairs lead up to the sacred mountain, leading to the many temples that vary according to types, status, and functions. Pura Besakih features three temples dedicated to the Hindu trinity. Pura Penataran Agung in the centre has white banners for Shiva, the destroyer; Pura Kiduling Kreteg on the right side is with red banners for Brahma, the creator; and Pura Batu Madeg represents Vishnu, the preserver, with its black banners. You can visit other temples in Pura Besakih, but many of their inner courtyards are closed to the public as they’re reserved for pilgrims. Pura Besakih is the only temple open to every devotee from any caste groups. This is because of its nature as the primal centre of all ceremonial activities.

History of Besakih Temple Pura Batu Madeg, containing a central stone, indicates that the area of Pura Besakih was already regarded a holy place since ancient times. In the 8th century, a Hindustani monk had revelations to build homes for people during his isolation. Throughout the process, many of his followers died due to illness and accidents. On its completion it was called ‘Basuki’, referring to the dragon deity ‘Naga Besukian’, believed to inhabit Mount Agung. The name eventually evolved into ‘Besakih’. Other shrines were gradually built and Pura Besakih was made the main temple during the conquering of Bali by the Majapahit Empire in 1343. Since then, Pura Besakih has had several restorations as earthquakes in 1917 and Mount Agung’s series of eruptions in 1963 damaged the complex. The lava flow passed by Pura Besakih and it is believed to be a miraculous signal from the deities that they wanted to demonstrate their power without completely destroying the holy complex their devotees had built for them.

Besakih Temple Highlights and Features The largest temple in the complex, Pura Penataran Agung, has different areas representing seven layers of the universe, each with their own shrines. Pura Pasimpangan on the downstream side (on the east of the main street) and Pura Pangubengan upstream are approximately three kilometers apart. Located on higher ground, the closest to Mount Agung’s peak, Pura Pangubengan has great vistas and it’s about a 30-minute walk from the main Pura Penataran Agung. Around 10 minutes to the east of Pura Pangubengan is Pura Batu Tirtha. It is where holy water is sourced for the ‘karya agung’ ceremonies at Pura Besakih and Pekraman villages. Four temples in the complex reflect four forms of God at compass points: Pura Batu Madeg in the north, Pura Kiduling Kreteg to the south, Pura Gelap in the east, and Pura Ulun Kulkul in the west. ‘Batu ngadeg’, literally ‘standing stone’, is found in the shrine of Meru Tumpang Sebelas at Pura Batu Madeg. This is where Vishnu is believed to descend. Still in the courtyard of Pura Batu Madeg, in front of Meru Tumpang Sebelas is the Pesamuan shrine (quadrangle-shaped with two lines of 16 poles) as a symbol of how Vishnu’s power interrelates with the world. At least 20 minutes to the northwest from Pura Batu Madeg, down the footpath to the valley and along the river, is Pura Peninjoan – erected on a tiny hill. The beautiful views from here include all the shrines of Pura Penataran Agung, beaches and southern Bali in the distance. On the west is Pura Ulun Kulkul, famous for the main and most precious ‘kulkul’ (Balinese wooden slit gong) on the island. Kulkul is a signaling device to summon or convey special messages. On the northern side of Pura Ulun Kulkul is Pura Merajan Selonding where the ‘Bredah’ inscription mentions a king in Besakih, and a set of ancient gamelan called ‘Selonding’ are kept. Pura Gua, located on the eastern side of the main street, is the home of the dragon deity. There’s a big cave at the canyon of the river on the east that has its mouth closed due to erosion, but people still sometimes practise yoga there. Pura Jenggala, southwest of Pura Penataran Agung, is also often called Pura Hyang Haluh by the local devotees. The ‘Setra Agung’ burial grounds is south of the temple. Here are sacred ancient stone statues in the form of the mythical garuda bird. Pura Basukian Puseh Jagat is located southeast of Pura Penataran Agung, the main foundation of Pura Besakih.