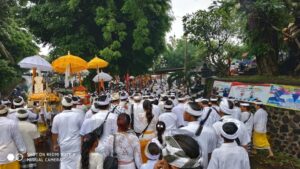 This major event is held to cleanse the holy artifacts held in local temples, to invite the faithful to purity their bodies in souls in the presence of their revered deities, and to honor the Gods.  It takes place on the first full moon after Nyepi, the Balinese New Year, which generally falls near the Spring Equinox.

The ceremony is aimed to clean all of Nature and its content, and to take Amerta (the source of eternal life) from the ocean or other natural water sources  such as lakes or rivers.

At dawn, the effigies and symbols of the Gods from the Kahyangan Tiga (three main village temples in Tejakula representing the origin, the continuation and the dissolution) and from the Dangka temples ( other village temples dedicated to local deities), are taken to the sea in long & colourful ceremonies, where they are bathed by Lord Baruna, the Sea God.

Accompanied by the gamelan ( Balinese brass troupe) the whole village marches in procession  for +3 hours to Ponjok Batu temple, a Universal temple dedicated to the great teacher, DangHyang Nirartha.  Prayers and offerings are made, sacred dances are presented, and the gods are celebrated before being taken back home to their shrines in the evening.