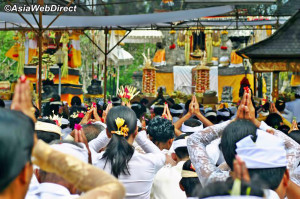 Sakenan Temple or ‘Pura Sakenan’ as referred to by locals, is an important temple in the southern region of Bali, located on the north-western shore of Serangan, a small island located 10km south of Denpasar. Once strong for its unique feature of pilgrimages during the 210-day piodalan temple anniversary celebrations with processions leading to the Serangan Island on foot or by traditional wooden boats, reclamations in the 90s have changed the ways, as well as the natural landscape of the island.

Sakenan Temple was built in the tenth century by high priest Mpu Kuturan, who arrived in Bali in 1001AD before the fall of the Majapahit Kingdom, on a mission to restructure the socio-religious aspects of the Balinese communities. The temple is comprised of two significant areas, the largest having undergone renovation except for its antique walls around the temple grounds, and a smaller part that retains its olden features. The old temple was built of limestone and corals sourced from the surrounding coastal reefs. Within and around the temple grounds are large and towering trees that are silent witnesses of the temple’s past. Given the infusion of dynamism in Balinese Hinduism, these trees are adorned with chequered cloths and are regarded as dwellings of guardian spirits of the temple grounds. Hundreds of pilgrims from the various village temples in southern Denpasar flock to the Sakenan Temple for its 210-day piodalan temple anniversary celebrations which coincides with the holy day of Kuningan, 10 days after the Galungan Day celebrations, another major Balinese Hindu observation. Before the reclamations that took place in the 90s pilgrims would carry ancient heirlooms and sacred temple objects at low tide by foot through mangrove forests towards Serangan. At high tide, traditional outriggers taxi the crowd over the waters. Now, the land mass is easily reachable by automobiles via a 110m bridge, making the colourful and unique boat rides memories of the past. Upon arrival, devotees proceed towards the Pura Susunan Wadon, a temple separate from the main Sakenan Temple grounds, located an approximate half kilometre to the east. Then prayers continue at the Pura Susunan Agung, and then the Pura Dalem Sakenan close to the westernmost shore of Serangan Island.

Pujawali or the grand celebrations and the piodalan or temple anniversary of Sakenan Temple falls on every Kliwon Kuningan Saturday, the day of the Kuningan observation in the Balinese 210-day Pawukon calendar and is held over three days with the height of the revelries on the Sunday. Access to the Sakenan Temple and the Serangan Island is easy via the bridge. However during the three-day temple celebrations, entrance fees apply to both pilgrims and visitors on cars and motorcycles. Fees range from IDR 2,000-5,000 and are collected by the village officials for the community’s fund. Several exceptional ritual dances are performed during the height of the piodalan celebrations, usually over the Kuningan weekend. These range from Barong dances to various Tari Topeng or mask dances, and all provide rare, spur-of-the-moment photo opportunities. As with any Bali temple visit, you may enter in proper temple attire, that is, a simple sarong and waist sash. Try to walk around offerings placed on the ground instead of stepping over them. Try not to obstruct a line of procession in progress. Also, women must remember not to enter temples during their periods.