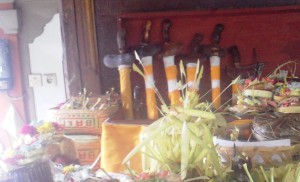 Tumpek Landep, The Aspicious Ceremony for Sharpening Metallic Objects, Hearts and Minds.
At least four times a year visitors to Bali will bear witness to cars and motorbikes cruising the streets of the island decorated with ‘sampian’ and ‘lamak’ – offerings made of young coconut leaves and fl owers. The decorations mark that the cars and motorbikes have been blessed through ceremonious rituals.

Ceremonies held on Tumpek Landep day are uniquely held to bless metallic objects, including cars, motorbikes, and machinery. The rituals aim to honor Sang Hyang Pasupati, Lord of Heirlooms, for the creation of steel goods.

Initially, Tumpek Landep was a day of rituals given to specifi c sharp tools made of steel like weapons, ‘tombak’ (spear) and ‘keris’ (a traditional wavy double-bladed dagger). Both ‘keris’ and ‘tombak’ are symbolically used by temples during festivals and processions. Keris is also an essential tool used in the performing arts. Almost all male dancers representing a hero or the upper class have a keris across their backs and use it as a weapon during a war or fight.

Today, ceremonies on Tumpek Landep are extended to ritualize all objects made of metal, including cars, motorbikes, trucks, computers, televisions, digital cameras and machinery. Machinery, vehicles, and other goods are washed and cleaned prior to the ceremony. Transport companies who own several cars or buses, printing companies, rice-milling factories and all other factories normally close operations on Tumpek Landep day.