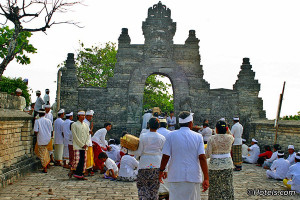 Uluwatu Temple, or Pura Luhur Uluwatu, one of six key temples believed to be Bali’s spiritual pillars, is renowned for its magnificent location, perched on top of a steep cliff approximately 70 metres above sea level. This temple also shares the splendid sunset backdrops as that of Tanah Lot Temple, another important sea temple located in the island’s western shores. Pura Luhur Uluwatu is definitely one of the top places on the island to go to for sunset delights, with direct views overlooking the beautiful Indian Ocean and daily Kecak dance performances. Balinese architecture, traditionally-designed gateways, and ancient sculptures add to Uluwatu Temple’s appeal.
Without a doubt, what makes Uluwatu Temple spectacular is its cliff-top setting at the edge of a plateau 250 feet above the waves of the Indian Ocean. ‘Ulu’ means the ‘top’ or the ‘tip’ and ‘watu’ means a ‘stone’ or a ‘rock’ in Balinese. Several archaeological remains found here prove the temple to be of megalithic origin, dating back to around the 10th century. There are two entrances to Uluwatu Temple, from the south and the north. A small forest lies at the front and hundreds of monkeys dwell here. They are believed to guard the temple from bad influences. The serpentine pathway to the temple is fortified by concrete walls on the cliff side. It takes about an hour to get from one end to another as there are several fenced points along the way to stop. The views from the bottom of the water surging up against rocks and the ocean horizon are remarkable. The Balinese Hindus believe that the three divine powers of Brahma, Vishnu, and Siva become one here. That belief results in making Uluwatu Temple a place of worship of Siva Rudra, the Balinese Hindu deity of all elements and aspects of life in the universe. Pura Uluwatu is also dedicated to protect Bali from evil sea spirits.