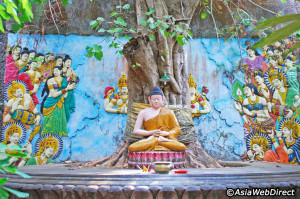 Vesak or Waisak is a holiday observed traditionally by Buddhists. It is the highest Buddhist ceremonial day as it marks the birth of prince Siddharta Gautama, the awakening of the Buddha and the day when he entered Parinirvana, the day of his death when he merged into Nirvana. The date varies each year on the Gregorian calendar as it is the fourth full moon in the year, but usually happens between end April or in May up to beginning of June. Unique to Buddhists in Bali is that some rituals share slight resemblance to Balinese Hindu features. You can witness this in the use of temple ornaments.